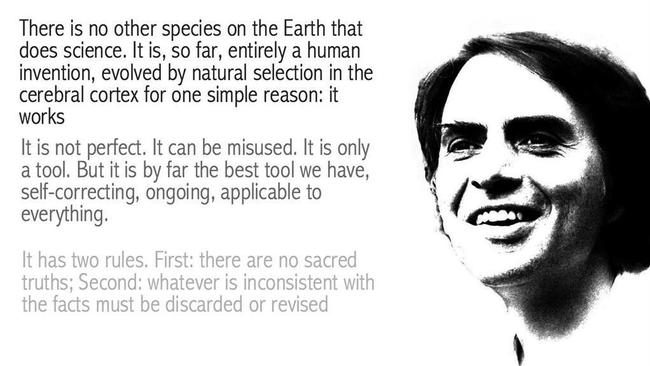 He is my hero. Carl Sagan was an American astronomer (1934 – 1996), popularised astrophysics and astronomy to wider audience with his COSMOS television series and followed by serious of books related to astronomy, evolution. His crystal clear voice and poetic simple language mesmerised many people. He popularised science with his books and television programmes. I adore him a lot, he is my inspiration.

[Important events in his life]
1934: Born to Jewish parents, Brooklyn, New York.
1951: Graduated from Rahway High School in New Jersey.
1960: Doctorate in Astronomy and astrophysics.
1968: Worked in Harvard University.
1971: Director planetary studies, Cornell University.
1972: Associate Director Center for Radio Physics and Space Research, Cornell.
1972: Assembled the first physical message that was sent into space for NASA (He was adviser to NASA from his early days, one of the main duties worth mentioning during his tenure at NASA was briefing the Apollo Astronauts before their journey to Moon)
1996: Taught at Cornell a course on ‘critical thinking’ until his death.

[Few of his books in my shelf (worth a read)]
The Demon-Haunted World: Science As a Candle in the Dark
Pale Blue Dot: A Vision of the Human Future in Space
Cosmos (His popular television series).
The Dragons of Eden: Speculations on the Evolution of Human Intelligence.