Story of Aaron, chasing a startup dream in epic style

Recently, Apple acquired a start-up called “BookLamp.com” for approximately $15 million US dollars. It was an usual news for many, as big companies frequently buys small start ups to strengthen their competitive advantage. But this news gave me some sort of happy ending to a story which I started tracking from year 2007 onwards. It is all about chasing a start-up dream, in epic style drama.

It is a story about Aaron Stanton, Founder of BookLamp.com. It is all started with the following blog post from him, sometime during Feb 2007. 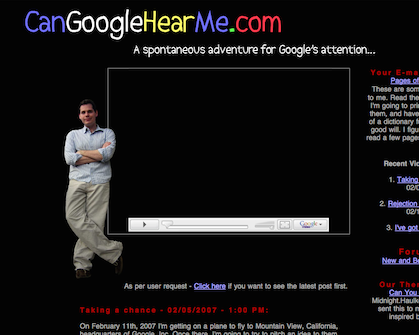 “On February 11th, 2007 I’m getting on a plane to fly to Mountain View, California, headquarters of Google, Inc. Once there, I’m going to try to pitch an idea to them that, I think fits right in with the Google spirit and business model; catch is, I don’t have an appointment, they don’t know I’m coming, and I’m literally going to be showing up at their door and hoping they give me a meeting.”

This was the first post of Aaron Stanton. Published on his blog CanGoogleHearMe.com, which he named aptly. His plan was going directly to Google office and ask for a meeting at front desk, with a hope that he can meet someone. But as expected, it didn’t work out that way. He was shown the door. His Plan B was to write about the whole thing in his blog CanGoogleHearMe.com. A journey of a kid from a small town, envisioning an idea, going after a big company like Google to sell it, and documenting the hardship he goes through during the whole process on his blog. He had some hope that, this blog will serve as a visiting card for him and somehow he can get the attention of Google. This plan, worked out as he hoped. His blog went viral immediately and Aaron becomes blog sphere sensation overnight. He started publishing many blog posts about his travel and preparation for the meeting in case if it happens. His plan was to get attention of Google, some how, sell his start-up idea, and go back home if didn’t work out. His story hit the front pages of many social media sites like digg.com. (That’s when, I started tracking him).

He was blogging about everything, except the actual idea he was planning to sell to Google. Many stories started floating around about, what his idea would be, and many wild speculations around that. But he was tight lipped about it. There were hype and anticipation from many, whether google is really going to hear him or not? Or he is going to go back home empty handed. Thousands of supportive emails poured on his inbox. Which could run thousands of pages if it would get printed and he did that eventually later (Binding a book with all the emails printed). A local music band inspired by his quest composed a theme song for him. Many volunteers joined him to support his blog without any salary. He was a sensation during the entire month of Feb 2007 and become an overnight rock star. Become a hero for many, for chasing an American dream in epic style. Mean time, mainstream big media houses like BBC radio, Sydney morning herald picked up his story started featuring him on prime time. 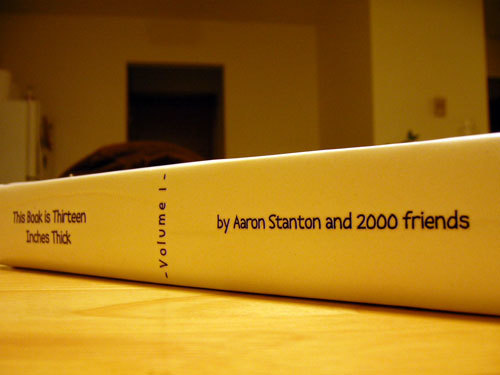 After a few days, the magic really happened. Yes, Google did hear him. Some one up in the chain, saw his blog post, and send him a mail saying “We did hear you :)”, and arranged for a meeting. It was the nail biting climax for readers of his blog, anticipating wildly about what is going to happen in the meeting, whether Aaron is going to reveal the idea to all of us, after the meeting gets over or not.

But what happened after the meeting was an anticlimax and still a mystery. Aaron stopped talking about the details on what happened during the meeting. He posted briefly that the meeting was rushed one, but was very useful. Neither no posts about the meeting, nor what were his ideas is all about was revealed. Big disappointments to his followers like me. Later all his blog posts were about the return journey to his home town and a few posts about hiring programmers, nothing significant to notice. Later days he posted about putting together a team and pursuing chapter 2 of his journey. What transpired in the meeting was left to the imagination of his followers. It was to assume that, probably Google asked him to build a prototype and come back later.

The chapter 2 was exactly about that, converting his idea into a product. All his posts were about hiring a new team and process of building a product, He was writing about, beta testing, filing for patents etc.

Almost after a year from his first blog post, Aaron did reveal what his idea, he originally wanted Google to hear. It was the unveiling of BookLamp.com, a book genome project. Book recommendation engine based on writing style and pace. Similar to what pandora.com is for the music lovers. It analyzes a book for thousands of data points to provide a recommendation. Interesting thing to note here is that, so far the start-up was self funded, no VC fund yet, or he didn’t talk about it explicitly, though there were a few posts of meeting new VCs time to time.

As per his interviews given later, the CanGoogleHearMe ordeal gave him good enough contacts to be successful in taking his product back to big companies like Amazon, Yahoo and again to Google easily.

After unveiling the product and inviting beta testers for booklamp.com, he decided to take this full time, looking out for investors and a permanent office, and his own words it was Chapter 3 of his journey. Like many, that’s is the point I stopped actively tracking Aaron and CanGoogleHearMe.com. There were occasional news of BookLamp got some funding etc. 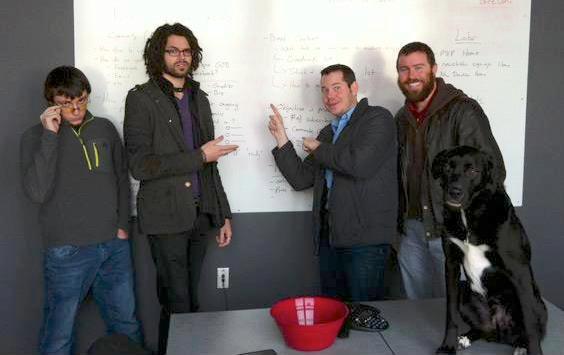 It was the news of Apple buying BookLamp.com brought back the memories of one time rock star Aaron, and how he chased his dream in a dramatic way. After reading his interviews and witnessing how the entire story was unfolding, it was meticulously planned plot unveiled chapter by chapter to the public eye. He got a head start during his initial days with CanGoogleHearMe strategy. Even though Google didn’t buy the idea, it did help him to build lots of contacts and ability to attract better programmers, which helped him to build a successful product and eventually to sell it to a big company like Apple.

A later interview he did admit that entire thing was planned, From chapter 1 of knocking google’s door to starting cangooglehearme.com and beyond.

It was a full circle for him, to complete a journey he started during his school days. To build a system, similar to how his father used to rate each page of Aaron’s writings during his earlier days, and selling the same idea to a big company.

Apple buying BookLamp.com was a big surprise as no where, he was chasing Apple in his entire journey.

Though he wanted Google to hear him initially, but Apple did hear him at the end. All the best for Aaron, for his Chapter 4 at Apple.

Published on my linked in profile here

Google and Apple announced its foray into TVs and Autos recently. ‘Compute Continuum’, a phrase spread headed by Intel, which refers to a computing paradigm where an user’s ability to use an application with its last known state across... Continue →